We are certain that our readers will appreciate another firearms feature as a respite from our continuing coverage of the Philippine election gun ban.

The subject of this article is the Kel-Tec SU-22—a modern .22LR carbine with a distinctly “tactical” pedigree. This will also be Home Defense Journal’s (HDJ) first evaluation of a firearm made outside the Philippines.

Those up-to-date with developments in the firearms scene know that Florida-based Kel-Tec has carved a huge name for itself manufacturing sub-compact pistols aimed at the US concealed carry market. More recently, the firm has also targeted the American survivalist as well as law enforcement markets with rather off-beat carbines. Kel-Tec liberally utilizes synthetic materials in all its offerings.

At first glance, the SU-22 does not look like a .22 rimfire carbine at all! Instead, it bears more than just a passing resemblance to the latest generation of tactical carbines. True enough, Kel-Tec does indeed manufacture 5.56mm tactical carbines with virtually the same silhouette, but we can get to that in some future report.

Picking up the SU-22, you will find that almost all the surfaces your hand will come in contact with are constructed of polymer (except the barrel). This is because the carbine’s steel action is encased in what is contemporarily known as a polymer “chassis.” The use of lightweight materials allows an empty weight of just 4 pounds.

With its 16-inch barrel, the carbine’s overall length is a handy 34 inches. A novel feature of Kel-Tec carbines, including the SU-22, is that they can be completely folded (reminds us of a folding bed!) for transport or storage. This, naturally, renders the gun inoperable. Our host did not demonstrate this for us but we are told that it is a relatively simple process.

The picatinny rails located at 12 o’clock of the upper receiver allows the attachment of various optics as well as the rudimentary rear sights supplied with the carbine. Also, rails may be found at 6 o’clock of the fore end for clamping-on lights, bipods, fore grips and other useful (or just aesthetically pleasing) accessories.

Our range date with the SU-22 took place last January 10. We proceeded on foot to the Jethro Firing Range at the Makati Cinema Square Mall (Makati City) right after wrapping up an episode of our talk show Practical Business at the nearby studio of Global News Network (GNN).

The show’s guest that day happened to be Dino Rodriguez, who co-owns Defensive Armaments Resource Corporation or DARC, the firm that imports Kel-Tec products to the Philippines. Dino was invited to discuss the projected impact of a 5-month long gun ban on the local firearms industry.

Dino brought with him a brand new SU-22 that had just been released by the customs bureau and three boxes of Armscor high velocity .22LR ammunition.

All the SU-22’s controls were pretty much traditionally located, so it was easy for us to figure out how to load and fire the weapon with no instruction. Using the utilitarian sights supplied with the carbine, we ran through the first 50-round box of high-velocity hollow points. No malfunctions whatsoever were experienced using Armscor’s generic ammo.

Our companions ran through the next 100 rounds of the same ammunition with similar results. Literally just out of the box, the SU-22 gulped down then spat out 150 rounds with no stoppages or any other hang-ups. Reliability is ALWAYS our first consideration in any gun.

Since Jethro’s indoor range was designed primarily for pistols, the distance at which we could test the carbine was rather limited. So, instead of shooting at the Alpha Zone of the cardboard target, we aimed for an imaginary dot located at the center of what was supposedly it’s head! We managed to bunch up our hits rather nicely. Thus, we concluded that the carbine was sufficiently accurate for recreational plinking and even small game hunting.

Because HDJ caters mainly to security-minded readers, it must be asked if the SU-22 has any practical use as a serious home defense carbine?

PLAY: Author found out first hand that the SU-22 has few peers as a recreational “plinker.” But he is convinced that this handy carbine can also serve in more serious applications. (Video by IGG)

Intimidation. As was said earlier, the SU-22 has an outward appearance of an “assault rifle” of sorts. The sight of a determined home owner with this carbine in hand will probably be enough to cause most (but not all) trespassers to flee! Remember, most intruders are motivated by financial gain, and thus, it makes bad “business sense” to engage a “heavily armed” home owner.

A puny .22? Still, there are undeniably some criminal elements out there who will give the otherwise peaceful home owner no choice but to shoot! And admittedly, the .22LR is far from being an ideal choice as a defensive calibre. But when fired from a carbine-length barrel and loaded with modern high-performance ammunition, its capacity to do damage to flesh should not be underestimated either!

For example, CCI’s popular 32 grain Stinger hyper velocity ammo has a published muzzle velocity of some 1,640 fps, presumably from a long barrel. Meantime, Remington’s 33 grain Yellow Jacket hyper velocity ammo will reportedly achieve 1,500 fps from a similar barrel. Both products, as well as similar products from competitive makers, will surely optimize the stopping power of any .22LR carbine.

Make certain, however, that your gun will reliably chamber whatever ammunition you end up selecting!

Handling characteristics. The SU-22 is compact enough to be easily maneuvered around residential hallways and corridors, provided the user takes the time to get truly acquainted with it. Holding it close and tight to the body feels very natural, in this writer’s subjective view.

The ease by which red dot optics and lights can be attached to the carbine also reinforces its viability as a house gun. Better still, its high capacity (26-rounds) magazine and the speed by which an empty mag can be replaced, promises to further endear the SU-22 to many defense-oriented shooters.

Lastly, the near absence of felt recoil ensures that slightly-built people and those who are not “into guns” can easily employ the SU-22 to protect life and limb. 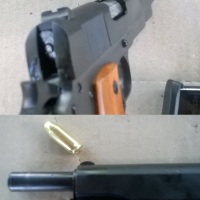